We are proud to present our second episode of Grub Sessions featuring Homeboy Sandman! 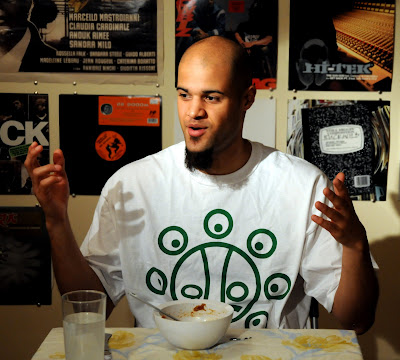 A fixture on the NYC underground Hip-Hop scene, Homeboy Sandman has crafted his own style - boasting creative lyrics and a melodic flow reminiscent of Rakim, Pharoahe Monch, and Black Thought. It's only a matter of time before those names will be singing his praises too. Sandman has received Unsigned Hype in The Source, was named Best Hip Hop Act in Manhattan by New York Press, won the TAG Records Emcee Competition for NYC, was named Ralph McDanial's Video Music Award Winner, was the inaugural winner of End of the Weak's Strongest New Artist Award, and was selected to perform in Hot 97's " Who's Next?" Series.
Fresh from a knockout performance at the SXSW Music Festival, Homeboy Sandman dropped by to talk with us about how he uses words to craft his songs, gun samples in Hip-Hop, his unique guerilla marketing tactics, and more. Even though Homeboy Sandman only eats raw food, he was nice enough to make an exception for our Ethiopian-Inspired Vegan Stew with Potatoes, Carrots and Chickpeas.
- Jed I. Rosenberg
http://www.myspace.com/homeboysandman
www.homeboysandman.com
unfortunately i've learned that he's no longer vegan--more here:
SS: I read that you were Vegan somewhere. What made you decide to become Vegan and talk about the benefits of living that lifestyle.
Homeboy Sandman: I'm no longer a Vegan. All that I ate was raw organic foods for an entire year. I was actually a raw organic Vegan. I only ate raw organic fruits, vegetables, and nuts. Toward the end I wasn't even using sea salt or seasoning or nothing--it was completely Neanderthal status. The reason why I did that was because I care so much for emceeing that I'll do anything that I feel is natural. I'm not for artificiality of any sort. Before I became a good MC all of my creativity was spurred by substances. I'd never do something like that now, that's not how I get down. As far as eating right, exercise, watching TV, listening to music or the thoughts in my head I'm looking to streamline myself. I want to be as rock solid as possible as an MC. I want to be able to rhyme over any beat and make any song about any topic. I want to be able to write a song about this interview and make it slammin'. So I said let me see if eating frees up mental space. My year eating raw food was easily the most productive year of my life. There are great benefits like energy, health, and creativity.
Recently I've started instituting cook foods and even free range chicken. I think it was great and I love that I did it because now the way I've been eating for two months I'm feeling great. Creatively I'm in a fantastic place because I'm able to enjoy some brown rice and beans but at the same time I crave bananas. I crave avocados and apples--natural stuff. I'm still mostly organic and I don't eat a whole lot of meat. I don't eat any red meat but I eat free range chicken. I'll still go a whole day and realize I didn't eat anything but some raw greens. This stuff is all good for you. It's a process, I'm experimenting with myself. You gotta get a lot of this good stuff inside you. For me, I lost 50 lbs. and there was positives and negatives in trying to figure it out. I feel like it's important to eat stuff that grows. It's important to eat kale and broccoli, you can't be sitting here eating Cheez-Its and Dorito's. Nothing about that stuff has anything to do with real life food. There is food on this planet that was given to us to eat like that has nourishment in it and we need it to perform at an optimal level. Right now I'm trying to find a balance but being Vegan was one of my first steps on the way to emceeing, I co-sign it...
at December 20, 2010